Sometimes I think I need to go back and re-read my own posts! Like... a sentence from this post:

In our own lives, this means "choosing to live your life intentionally and acting with purpose rather than mindlessly falling victim to whatever comes your way."

I just realized this morning that I have been doing exactly what that line says  NOT to do. Sheesh. It feels as though every time I get some traction going in this weight loss/health thing, along comes something to kick me to the curb.

Yet, sometimes we don't hear ourselves! A little while ago I was on the phone talking to my sweet, empathic Sister. She said something that really stopped me, and helped me very much. She said it sounded like I was allowing excuses to stop me from making progress. Ouch! But she was right. I just hadn't been listening to what I was saying. I really appreciated that truthful reminder said in love. 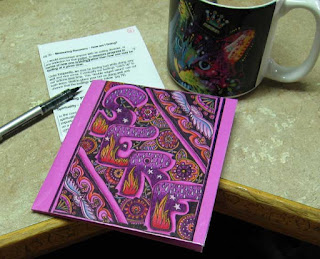 So, I'm going back to basics... again. And what was the first line that I read???!! This sentence from Dr Marty Lerners free booklet:

"I would encourage anyone with an eating disorder,
or any addiction for that matter, to measure progress
in terms of how one is doing rather than how one
may be feeling at a given time."

Wow, how could I have forgotten that?!

Why? I looked at circumstances, and fell victim "to whatever comes your way", as it said above.

My title for this blog post came from something a doctor told me years ago right before a medical procedure. "Oh, it's safe. It's one in a million that anything ever goes wrong."

Uh huh. That day I was that one in a million.

Back to present day. Went in for what was to be my LAST dental surgery. I was so excited to be at the end of a long process. And so what happened??

Again, I was that one in a million. Aaarrrgghhh!

They sliced open the upper gum and peeled it back to work on my brand new shiny implants, to get ready for my permanent dentures. Part of the work involved placing a tiny "torque test" tool inside the implant, to test how strongly it was bonded to the bone. I've had this little test done many times before. No biggee.

Except, this time it was a biggee. The tiny tool broke off INSIDE my implant!!!! It felt like they were pick-axing to China as they desperately tried to get it out. No go... wouldn't budge.

So they sewed me back up with the broken part still inside me!! That was last week. No teeth, no dentures, no chewing. Waiting for the manufacturer to send a special "retrieval" tool, and then I get to go back and repeat the whole surgery all over again.

I'm not mad at the dental surgeon at all. He's very skilled, and has been great these last couple of years. And he's refusing to even charge me for this go around (and he told me that BEFORE the fiasco).

And so I pouted and ate and complained and allowed stinkin' thinkin' to make me discouraged. Funny thing is... I had forgotten that when I can't chew anything, and it's all mushy or liquid, I don't seem to ever feel satisfied. Never full. Never satiated. Always want MORE. So I ate more. Now I weigh more. Sigh....

My action plan?? Back to basics. No huge changes, other than my thinking. Just DOING what I should be doing.

Plain. Simple. Doable. I dunno... there is something comforting in a simple plan. So that's what I'm DOING now.

And the cancer surgery?? Still waiting. It's actually taken, literally, months to get appointments with the various specialists I've been told to see. Ooh la la, they are so elite and elusive. 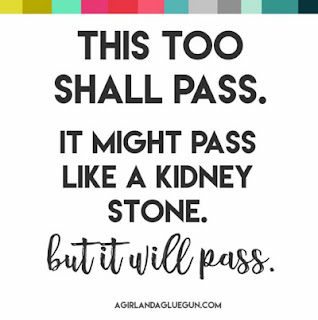 Still on the Journey,