JAN 4th Parable of Progress: The Princess & the Sharpie


There was once a Princess who liked to draw and paint.

As such, she tended to doodle on whatever didn't move. This Princess had a room in her castle: a tiny bathroom, with plain white walls. And she waited and waited for her Prince to paint said walls.

He was too busy out slaying dragons to do the painting, so one day the Princess decided "That's it!" She took up her Royal Sharpie, and started drawing a Doodle Universe right onto the walls!

Oh, she had a plan. First, the doodle in black Sharpie. Next, some subtle shading. Then, some sponged on soft color in the background. And finally, a few spots of bold accent color here and there.

The Princess started her daring project in the summertime, in August. But by winter, with Christmas already come and gone, she was only just finishing up the last wall... of the doodled sharpie drawing!! She hadn't even started the shading or color yet. Even taking into account that she couldn't stand very long each time she worked on the drawing, it had still taken so much longer and had been so much harder than she thought it would be.

At times she got discouraged and wondered why she had even started (whose briliant idea WAS this?!). She even toyed with the idea of compromise... just letting it stay in black and white, and forgetting all the work it would take to add the color.

And naturally, she thought about her journey to health. How it, too, had taken so much longer than she had hoped, and been so much harder than she could have imagined. And how she had gotten discouraged, and toyed with ideas of compromise.

But as she finished up the last doodle element on the last wall... she knew she would finish it, and add the color. The right way. All the way. No matter how long it took, no matter how hard it was.

And she also knew the same would be true for her journey to the best possible health. She would continue, all the way, no matter how long it took, no matter how hard it was. 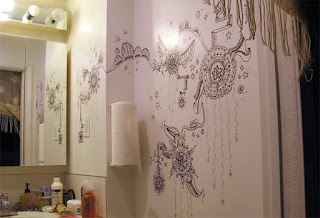 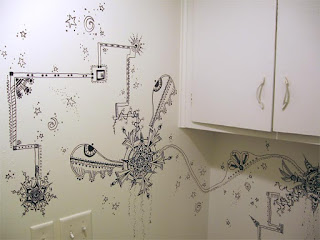 For photos of all the walls, the process, and the symbolism behind the designs, I invite anyone interested to visit my art blog (Art By Retta)  where I go into that kind of detail. :-) 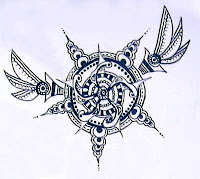