I can’t believe it’s been this long since I last posted. Oh well. 2019 was a rough year, health wise. But somehow (to my amazement and gratitude), I’ve finally passed the 200 lbs lost mark.

Gee. That amazes even me. It took years, but I’m finally there. I was thinking today… at first I felt really proud of myself. Yet found there was also a sadness. If I had only done this sooner….You know, all those regrets.

So please, kiddos, don’t do as I did. Do it sooner, not later. I need to just accept that disappointment over waiting so long, and then get on with being happy about the progress. What’s the cliche we throw around? Progress, not perfection. 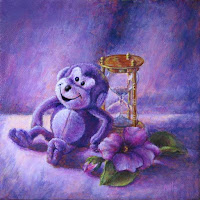 No Time to Monkey Around
by Retta

I discovered a lovely new artist on FB that I am following. Pat Butynski is her name. She is going through some rough times herself, but still makes wonderful art. She has this ability to be in touch with and honest with her feelings  (grief over losing her Mother last week, and her own heath issues).

Honestly, I don’t think I’ve really learned how to integrate the down times, and feel them, and still have the Joy. So I tend to focus on only the Joy, and try to ignore the hard stuff.

But she writes beautifully of this. I’m listening Lord. Teach me. 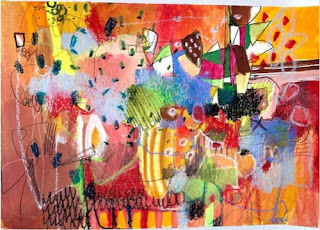 Edited to add: I realized today (Sunday the 19th) that I wrote here I had "waited so long". Uh,,, no. I tried repeatedly all my life. Just with methods that didn't work for ME. So, let's just say I regret not having found MY way sooner. It's true. And I like that better. :-)